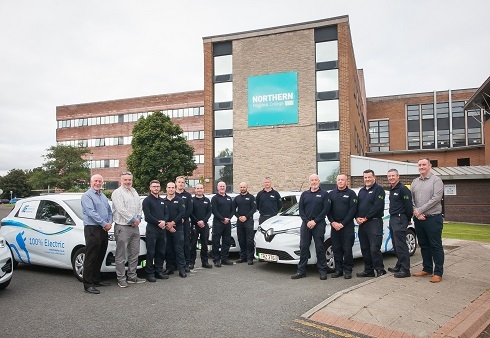 Northern Regional College has partnered with NIE Networks to deliver bespoke training for meter readers. Over 1 million electric meters across Northern Ireland are due to be replaced and the new training programme for metering operatives is in direct response to an identified need for staff with a specific skillset.

The College liaised with key stakeholders to create an accredited electrical installation qualification, alongside the specialist training and skills needed to replace the meters. The training delivered by the College will be complemented by NIE Networks own in-house training,

Following a rigorous internal selection process, the first cohort of 11 Training Metering Operatives was selected from NIE Networks’ existing pool of meter readers. During the two-year training programme, they will spend one day each week at the College’s Newtownabbey campus, two days at NIE Networks training facilities and two days on-site installing the new metering equipment.

Michael Breen, electrical installation lecturer at the College, explained why the College had developed the specialist training programme for their long-standing partner, NIE Networks.

“The College has a long standing relationship with NIE Networks and last year, we were asked to create a new training programme, following an identified need for more electric meter installers,” he said.

“Over a million meters must be replaced across Northern Ireland, so the company wanted to increase its pool of meter installation operatives by upskilling its existing meter readers.

“We developed a four bespoke modules, and, to ensure that we could deliver the training, the College invested in the development of a new dedicated workshop for Emerging Technologies at our Newtownabbey campus.”

Barry O’Lone, Meter Recertification Team Manager at NIE Networks said that there is a legal requirement for all electricity meters in Northern Ireland to be replaced.

“At present there are approximately 1.1 million meters, both commercial and domestic, and the meter replacement programme is deemed essential maintenance in order to maintain a safe and reliable electricity supply to all our customers,” he said.

“With Smart metering on the horizon in Northern Ireland, the demand for meter replacement is going to rise significantly.”

He explained that the decision to create a new training programme came about in response to recruitment difficulties.

“We usually employ time-served electricians but in recent years, we’ve found the recruitment process increasingly difficult, so we decided to rethink the process.”

“We have around 110 meter readers with very few opportunities for progression, so we made the decision to try and develop this,” he said.

Following a meeting between the Metering Services Management Team at NIE Networks and representatives from the College, including Michael, Matt Murray, Head of Advanced Technologies and David Lynn, Curriculum Area Manager, and the project was given the green light.

“Northern Regional College was supportive and allocated a significant amount of time for Michael to develop a bespoke course, which will be accredited by NVQ and City and Guilds,” added Barry.

Among the eleven new trainees recruited internally for the Training Metering Operative programme was John Boyd and it was a trip down memory lane for the Ballyclare man, who first attended the Newtownabbey campus as an engineering student forty years ago.

“There’ve been a few changes since then so it is strange to be back but I’m really looking forward to doing this training programme,” said John, who has been working as a meter reader with NIE Networks since 2010.

Paul Slavin from Derry said he jumped at the chance to be part of the new training programme.

Having worked with NIE for over 20 years, Paul sees it as an opportunity to develop new skills and to get formal qualifications.

He added: “I was delighted to be selected for the training programme. After leaving school, I qualified as a tiler but have been working with NIE as a meter reader for the past 24 years.

“It will be challenging but it’s great to be involved at the start of something new like this and, with all electrical meters across Northern Ireland due to be replaced, we’ll certainly be be kept busy!”