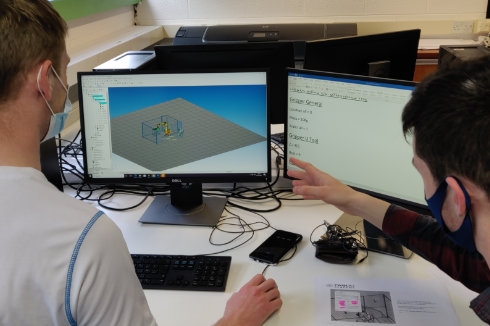 Engineering students at Northern Regional College have embarked on a journey which could bring them all the way to the WorldSkills UK National finals later this year. For the first time ever, Northern Ireland students had an opportunity to compete in the Industrial Robotics category of UKSkills and all six teams in the competition were comprised of engineering students from the College’s Ballymena campus. A total of twelve students from a variety of engineering courses, including Level 3 Extended Diploma, Higher Level Apprenticeship and Foundation Degree, participated in the first stage of the competition where they had to perform an offline programming task set and assessed by FANUC Ltd.

With over 60 years’ experience in the development of computer numerical control equipment (CNC), FANUC is a leading global manufacturer of factory automation – a fast growing and innovative field of engineering. Increasingly, industrial robots are used to perform automated manufacturing tasks as they can be programmed to work in a variety of sectors including assembly, welding and finishing.

Karla Kosch, lecturer in Engineering, course co-ordinator of both the Foundation Degree in Electrical & Electronic Engineering and Mechanical & Manufacturing Engineering explained that the competition was designed for students as a basic introduction to FANUC Roboguide simulation software, although she admitted that it was a steep learning curve for lecturers and students alike as they had never used this particular software before.

“Working in teams of two, competitors had to follow instructions and procedures to complete an offline programming task using Roboguide software and then submit the task online. They had to demonstrate that they could communicate ideas and work effectively together and the top teams will be selected to go through to the next stage of the competition, the national qualifiers to be held later this month.” (June)

Karla continued: “Competitions like this stimulate interest and enthusiasm. The next stage of the competition will require elements of CAD modelling and programming and will build on the knowledge the students gained in this first stage. The top six teams nationally will qualify for the UK finals in November when finalists will be tested further on their virtual and real-world programming skills using the FANUC Educational robot cell.

Acknowledging the support from her colleagues, engineering lecturer Alastair  Mitchell and engineering technician Dominic O’Hagan, who assisted in the staging of the competition,  Karla said the students had really benefited from the opportunity to learn more about industrial robotics.

“Although they had never used this software before, all six teams successfully completed the task and we wish them the very best for the next stage of the competition.”