Home / News / All Singing All Dancing Students at Newtownabbey

All Singing All Dancing Students at Newtownabbey 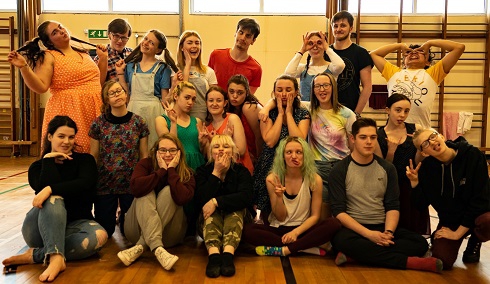 Show producer and Course Coordinator, Gemma McGranaghan explains that the end of year variety show is a real collaborative effort between staff and students.

All first year Performing Arts students at Level 2 and Level 3 at the Newtownabbey campus are involved in every aspect of the showcase: they each appear on stage at least twice singing, dancing or as part of a drama performance; when they are not performing, they are helping out behind the scenes, supporting set stages, costume stages, lighting, stage management and makeup.

Gemma continues: “The end of year shows are always eagerly anticipated. Although they involve a lot of work, they present so many different learning opportunities for our students and everyone pulls together to make sure everything is ‘alright on the night’.

“Since joining the College back in September, the students have developed new performance skills which has helped them grow in both confidence and ability. They have all worked very hard for the end of year show and they deserve to be well supported as this an excellent opportunity to show family and friends how their skills have been developed.”

The end of year show has something for everyone: monologues; duologues; musical theatre; original issue based drama penned by the students themselves; comedy; contemporary and jazz dance; and original music.

“Everyone is welcome – parents and friends, as well as anyone who thinks they would like to study Performing Arts at the College. Come along and be inspired by our students’ dazzling end of year show. I promise you won’t be disappointed when you see what they can do after just one year.”

Performing Arts, Year 1, end of year showcase production takes place in Theatre at the Mill, Newtownabbey on Monday, May 13. Curtain up, 7.45 pm. Tickets are available on the Theatre at the Mill website, £5 Adult;£3 Children/Concession.