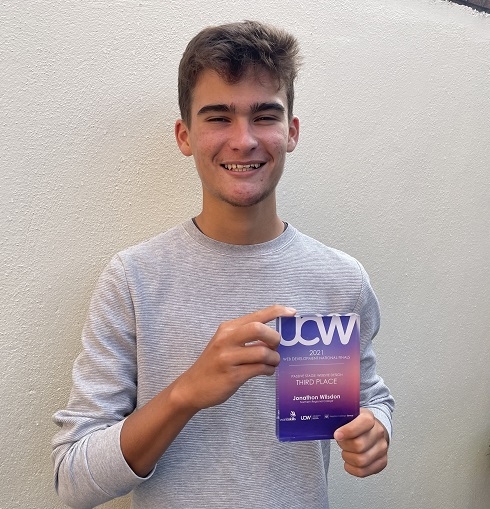 Jonathon Wilsdon, a talented young web designer from Bangor and former student of Northern Regional College, has qualified for the WorldSkills UK national finals. WorldSkills UK is a competition-based development programme designed to enhance practical skills and knowledge in vocational skills areas by assessing an individual’s employability attributes in a competitive environment. The original entry of over 3,000 competitors in 64 different skills area was whittled down through a series of local and regional heats with the eight highest scoring competitors in each skills area making it through to the national finals.

Traditionally the national finals are held in the NEC, Birmingham but this year, because of COVID restrictions, the finals will be held at venues throughout the UK between the 9th and 19th of November; the Web Design final will be held at Weston College in Somerset.

Jonathon is one of eleven students selected to represent Northern Regional College in the national finals. He completed a BTEC Level 3 Extended Diploma in Creative Media (Interactive Media) and achieved the highest possible grade to secure his place at Ulster University where he is in the first year of a BDes (Hons) degree in Interaction Design.

He said he had really benefited from his time at Northern Regional College and has no hesitation recommending the Level 3 Creative Media course.

“I would definitely recommend this course for anyone interested in any element of web design as it will give the right skillset to progress to university or employment in this sector.”

Web Design lecturer Aaron Colton said he was delighted but not surprised at Jonathon’s success:

“Jonathon is a hard-working and dedicated student. His recent WorldSkills UK achievement came as no surprise to me as he completes every task to a high standard. Since September 2019, I've had the pleasure of watching his skills and confidence grow as he became more disciplined and independent in his studies.”

Aaron added: “Jonathon knows that to become a successful web designer he needs to push himself beyond what is taught in the classroom. WorldSkills UK LIVE qualification was even more challenging this year because of the pandemic, so our department is massively proud of all that he has achieved so far. We will be following his journey very closely and wish him every success in the future.”

For the first stage of the competition, Jonathon had to design a single page website to meet a given specification. For the national qualifier round, he had to replicate a web site using industry standard web codes, including HTML5 and CSS3. He finished third out of 150 competitors to make it to the final.

Gordon Kane, Northern Regional College’s Skills’ Champion, congratulated all the finalists and said it is a wonderful achievement for them individually and for the College.

“We are justifiably proud of all our WorldSkills UK finalists for what they have achieved so far. It is wonderful to get through to this stage of a national competition and it is a great boost for them to have this on their CVs. They are shining examples of the skills and talent inherent in young people. Their success to date reflects their commitment and dedication to their respective career paths and I wish them every success,” he said.