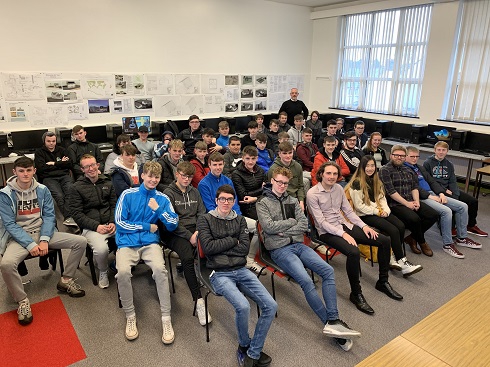 “Northern Regional College is an ideal steppingstone for university and a successful professional career,” according to some of the College’s former students. That’s the message from Jonny Stewart, a Chartered Town Planner, as well as his GM Design Associates colleague Keith Stewart, a Chartered Architectural Technologist.

During a recent visit to the Coleraine campus, the former Built Environment students emphasised the importance of employability skills, encouraging students to take ownership of the own career by developing their 3D design skills and not being afraid to apply for work placements during their Level 3 course.

Their presentation showcased projects they have been involved in, helping to provide the current students with a fascinating insight into the industry.

Pat Condren, a lecturer in Built Environment at the College, said:

“It’s always great to see former students achieving success, so it was a delight that Jonny and Keith were able to share what their roles involve with our current cohort of students.

“They both benefited from work placements during their time at College and I hope their stories will motivate our students and encourage them to work even harder to achieve their own goals.”

Having attended the College between Jonny 2000 and 2002, Jonny completed a BTEC National Diploma in Land Administration which allowed him to progress to the HND in Building and Estate Management which he completed in 2005.

Graduating with a BA (Hons) in Urban Planning and a Postgraduate Diploma in Environmental Planning from Liverpool John Moore’s University in 2007 and 2008 respectively, he returned to work for GM Design following a placement there during his time at the College.

Being awarded full chartered status from the Royal Institute of Planning in 2015, Jonny continues to work as a town planner on a range of exiting projects both at home and further afield.

Keith completed his BTEC National Diploma in Construction and the Built Environment between 2005 and 2007 before completing a Foundation Degree in Building Technology and Management in 2010, part of which included a work placement as trainee Architectural Technologist with GM Design. With the Foundation degree under his belt, he was able to complete his degree in Architectural Technology at Northumbria University in just two years, instead of the usual four.

Since graduating in 2012, Keith has returned to GM Design to work on a range of exciting projects before attaining chartership from the Chartered Institute of Architectural Technologists in 2017. The body presented him with the Award for Excellence in Architectural Technology for his work on Dungannon’s Castle Hill Event Space.