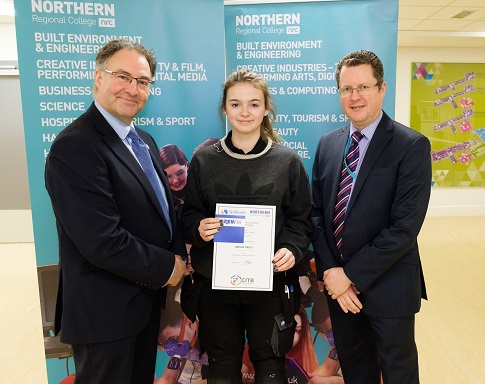 Ballymoney-local plumbing apprentice Abigail Reilly, a student at Northern Regional College was the only female student to win a gold medal at the annual Skillbuild NI competition. Abigail was one of only two females to take part in the competition, which sees apprentices from all over Northern Ireland pitting their skills against each other across different trade areas, including plumbing, carpentry, joinery, electrical installation and brickwork.

Now in the second year of her plumbing apprenticeship at the College’s Trostan Avenue campus in Ballymena, gold-medallist Abigail is employed by the Dowds Group, and has worked on major projects such as the multi-million-pound redevelopment of Altnagelvin Hospital.

This year marks the second competition success for Abigail in as many years as an apprentice, having won bronze at last year’s competition.

“Abigail is a fantastic role model and I hope that her success will encourage other young women to consider non-traditional career paths like apprenticeships.”

“Competitions like Skillbuild are a great way to showcase the talent and the technical skills of our apprentices and also to demonstrate to employers the high standard of provision which exists in our College.”

“This connection with local industry is important and we work closely with businesses to ensure our provision is relevant and reflects the industry needs and international standards.”

“Apprentices earn as they learn so they are contributing to the economy and, when they complete their apprenticeship, they are more likely to be in employment with higher disposable income which goes back into the economy.”

Organised locally by the Construction Industry Training Board (CITB) Northern Ireland, SkillbuildNI is the largest multi-trade competition in the UK for apprentices.

The other medal winners from the College were: Ashton Logan and Brandon Grant – both apprentices for Philip Lamont and based at Farm Lodge Campus, who took home 2nd place and 3rd place prizes respectively in the Brickwork category; and Patrick McCloskey, who won 2nd prize in the carpentry division and is based at the Coleraine campus, currently an apprentice for Dan Mullan.

All of these medallists are now in with a chance to represent Northern Ireland at Skillbuild UK national finals in Birmingham, depending on UK regional scores.