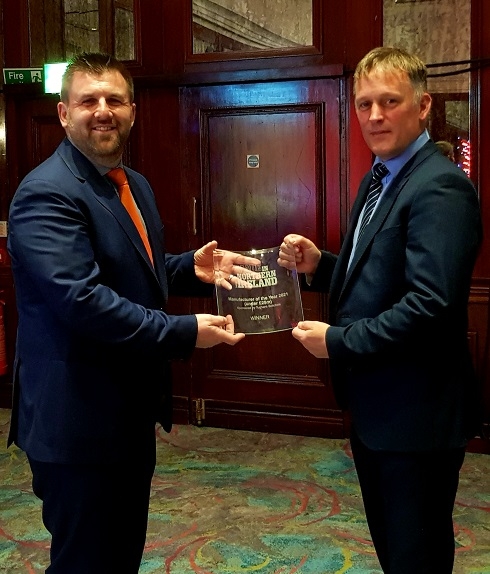 Congratulations to Hutchinson Engineering, winner of the Manufacturer of the Year Award (under £25 million) at the Made in Northern Ireland regional awards dinner in the Europa Hotel, Belfast.

Northern Regional College has enjoyed a long and mutually beneficially with the Kilrea based firm. Mark Hutchinson, the current Managing Director of business established by his late father Creighton, was awarded an Honorary Fellowship by the College in 2018. Mark has been at the helm of the successful manufacturing organisation for over 20 years and, under his leadership, the company has developed into one of Northern Ireland’s foremost manufacturing firms. The original workforce of just four has grown to over 120.

Alan Reid, Principal Lecturer, Engineering, who has provided technical support to  Hutchinson Engineering, attended the awards dinner as one of the invited guests. He said the award recognised the company’s contribution to the local economy and was very well deserved.

“The College has completed a number of collaborative projects with Hutchinson Engineering in recent years, including several robotics projects. I have always been impressed by the company’s willingness to innovate, which was particularly evident in the past eighteen months. Faced with a global pandemic, they were able to design a foot-operated hand sanitiser and get it to market within four weeks.

Offering his congratulations to the company, Alan added: “It was  a privilege to attend the dinner and see Mark and Richard Hutchinson lift the award for Manufacturer of The Year (under £25M), this was  an exceptional achievement in such challenging times.”