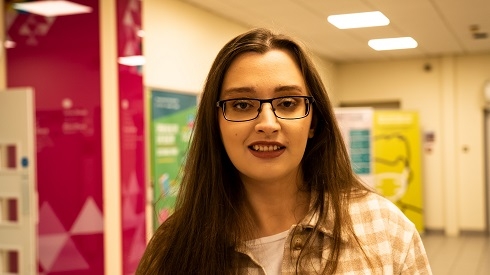 Islandmagee’s Savannah Hodgins will represent Northern Regional College in the 3D Digital Games Art category at the WorldSkills UK national finals. WorldSkills UK is a competition-based development programme designed to enhance practical skills and knowledge taught on vocational courses by assessing an individual’s employability attributes in a competitive environment. The original entry of over 3,000 competitors in 64 different skills area was whittled down through a series of local and regional heats with the eight highest scoring competitors in each skills area making it through to the national finals.

Traditionally the national finals are held in the NEC, Birmingham but this year, because of COVID restrictions, the finals will be held at venues throughout the UK between 9 and 19 November. The 3D Digital Games Arts final will be held in Media City, Salford, Manchester.

Savannah, one of 11 competitors to represent Northern Regional College students in the WorldSkills National finals, studied Level 3 Creative Media Production (Digital Game Development) at the College’s Newtownabbey campus. She is now a first-year undergraduate at Ulster University where she is doing a BDes (Hons) degree in Animation.

Savannah said she would ‘absolutely recommend’ the Level 3 Creative Media course to anyone who enjoys playing video games and would like to learn about how to create them.

“I really wanted to improve my digital literacy skills and the Level 3 Creative Media Production course provides an easily accessible way to learn specialist skills and software related to the game industry, such as 3D modelling, programming, game concepting and design. Thanks to the encouraging nature of the learning environment and the excellent support from lecturers, the task of combining these skills to follow a brief and create a game became a fun and rewarding challenge.”

Savannah continued: “The skills I learned at the College gave me the confidence to compete in WorldSkills UK qualifying heats and make it through to the national final in the 3D Digital Game Art category. Being a WorldSkills finalist is something I can now proudly put on my CV.”

Congratulating Savannah on her success in the competition to date and wishing her all the best in the finals, Jonathan Shields, Animation lecturer at Northern Regional College said: “Savannah’s 3D projects are skilful blend of creativity and technical knowledge. We can’t wait to see what she produces in the future.

“Savannah is a highly motivated and enthusiastic student who always goes above and beyond, and this dedication and commitment has helped secure a place in the 3D Digital Game Art WorldSkills UK national final. Savannah’s qualifier and semi-final entries were a fantastic showcase of her creativity and attention to technical details, even under strict constraints of time and resources.”

To qualify, students were given a theme and had to write a narrative around it. They sketched their ideas using Maya, a 3D modelling software similar to AutoCAD, to create a three-dimensional character. Savannah’s character - George the Snail with a transparent shell which provided a home for fireflies attracted by his glowing and brightly coloured skin - was textured by digitally cutting out seams and unwrapping the model to make a flattened 2D surface to paint on. The hand-painted finish was achieved using a graphics pen tablet.

Gordon Kane, Northern Regional College’s Skills’ Champion, congratulated the finalists, saying it is a wonderful achievement for them and the College.

“We are justifiably proud of all our WorldSkills UK finalists for what they have achieved so far. It is wonderful to get through to this stage of a national competition and it is a great boost for them to be able to have this on their CVs. They are shining examples of the skills and talent inherent in young people. Their achievement also reflects their commitment and dedication to their respective career paths, and I wish them every success.”