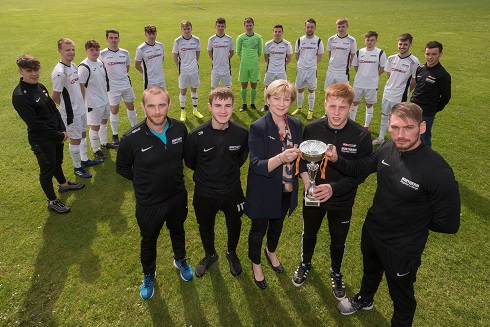 The competition, which is an amateur/semi-pro tournament, is a magnet for teams and football scouts from across Europe, including Spain, Germany, France, Denmark and Italy. To reach the final and lift the trophy, the Coleraine-based team had to play five games in just four days.

Northern Regional College has a successful track record at the Copa Costa Brava tournament, having been crowned champions in 2017– their first time competing in the tournament.

The College is no stranger to sporting success. Last year, seven of its students represented Northern Ireland in football on the international stage while there were representative honours for students in other sporting disciplines, including netball and women’s rugby.

“Winning is a culture within the College, but it isn’t something that just happens. It takes a lot of hard work and dedication from the players, coaches and lecturers. The players’ education here at the College goes hand-in-hand with this: having the players in class analysing performance, fitness testing and receiving training on their sporting needs is vital to their development.”

Speaking on the importance of taking part in these competitions, she continued:

“It is through playing in these elite competitions that our players get recognised for scholarships and we currently have two players with full scholarships to US colleges. We also have international rugby and netball students who are securing scholarships to America on the basis of their education and sporting ability.”

“This tournament might be hosted in a holiday location, but it is an incredibly intense and challenging competition which attracts the very best in international football talent. Our team had their work cut out for them, but they absolutely stepped up to the plate and excelled. The cultural and learning experiences which the trip offers to them are enormous and the team really grasped the opportunity with both hands. We are very proud of their performance both on and off the pitch.”

“I would like to thank the clubs, such as Institute, Ballymoney UTD, Heights and Bertie Peacocks who have developed these players and who encourage them to play for the College and get experiences like this. I would also like to thank MCM Turbo’s and First for Fruit who are our team’s sponsors, as well as our individual sponsors such as: Score; Holgar Windows; The Barbers, Kilrea; Peacock Financial Advice; Fyfes; and Star Fuels.”

A variety of sports related courses, ranging from Level 2 up to Foundation Degree level, are offered by Northern Regional College on a full-time and part-time basis. These include Level 2 diplomas in Sport and in Fitness Instructing; Level 3 Diploma in Sport with optional specialisms (Irish FA/GAA/golf) and Level 3 Diploma in Sport and Exercise Sciences. On successful completion of the Level 3 Diploma, students can progress to do a Foundation Degree in Sports Exercise and Fitness. For further information on all the options available, go to www.nrc.ac.uk.