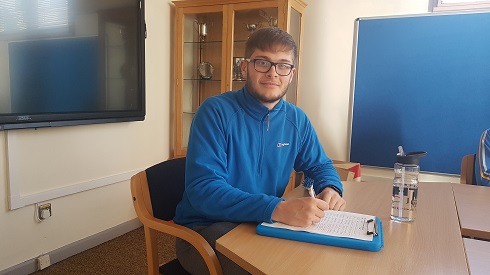 A Sports student at Northern Regional College gained first-hand experience of the benefits of video analysis in elite sport during a recent industry placement with the Irish Football Association (IFA). Jordan Pattison from Ballymena is doing a Foundation Degree in Sport, Exercise & Fitness at the College’s Coleraine campus. He travelled to the Canary Islands with the Northern Ireland Under 17 Women’s Football squad as part of their preparation for the UEFA European Championship Elite Stage Qualifiers.

Jordan explained how he was presented with the opportunity to gain first-hand experience of providing sport science support to elite athletes.

“One of my lecturers, Damian McCarry who normally does performance analysis for the IFA, was unable to go so he put my name forward. It was a brilliant opportunity and the experience was second to none.”

Jordan says the trip gave him a real insight to the level of professionalism in women’s sport:

“It was a real eye opener for me. I was really impressed with the level of professionalism, the squad’s work ethic and commitment to training”.

In addition to the squad of 20 players, Jordan worked along with the head coach, goalkeeper coach, strength and conditioning coach, doctor, physiotherapist and IFA delegate.

He explained how he used video analysis to assist coaches in providing constructive feedback to players.

“By watching videos of individual or team performances, we could identify weaknesses or find trends and patterns that could be changed.  Analysing the opposition’s performances also gave us an edge on our competitors, so analysis in sport has become increasingly important”.

“The coaches told me what they wanted captured on video, such as good passages of play, missed goal chances, goals conceded or passing errors and after these initial discussions with the coaches, I just got on with it. Thankfully, the feedback I got from both the coaches and players was very positive and given the chance, I’d like to do a lot more work like this”.

Jordan, who studied A levels in Biology, Sociology and Sports Studies at Slemish College, hopes to progress to BSc (Hons) Sport and Exercise Sciences at Ulster University when he completes his Foundation Degree.

“I decided to do a Foundation degree as I felt it would give me a bit of extra time to figure out what I really wanted to do at university.  A Foundation degree is a very good progression route to university as it allows you to explore different areas of Sport and Exercise Science before deciding what to specialise in.”

He added: “I also feel more confident now about going to university as studying for a Foundation Degree has helped me develop the necessary skills to manage the workload at university. I also have a part-time job as a lifeguard in Ballymena so another big advantage of the Foundation Degree is that I can still earn some money and balance working with my studies.”

Damian McCarry, Course Director of the Foundation Degree in Sport, Exercise & Fitness said Jordan was an exemplary student who had earned this opportunity through his application to his studies and had no hesitation when recommending him to the IFA.

“When asked to recommend a student to provide this support to the team, I had no hesitation in recommending Jordan.  Since commencing the Foundation Degree, Jordan has shown himself to be highly self-motivated and conscientious, with excellent inter-personal, time management and presentation skills, all the key characteristics required of a Performance Analysist working in elite sport.”