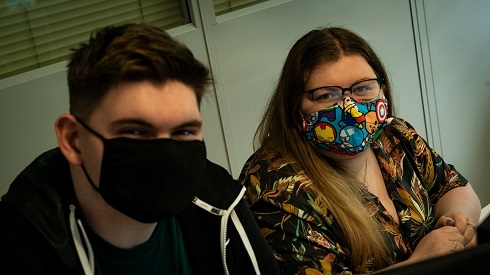 Engineering students Julia Millar and Thomas Simpson (‘The Cyborgs’) will represent Northern Regional College in next week’s WorldSkills UK Industrial Robotics national final. Both successfully completed a Foundation Degree in Engineering at Northern Regional College in Ballymena and have since progressed directly to the second year of a BEng degree at Ulster University.

WorldSkills UK is a competition-based development programme designed to enhance practical skills and knowledge taught on vocational courses. The original entry of over 3,000 competitors in 64 different skills areas was gradually whittled down through a series of local and regional heats with the top eight in each skills area going through to the prestigious national finals. All eight finalists in the Industrial Robotics category are representing the College - making it the only Further Education college in the UK to have a clean sweep in the national final.

Traditionally, the WorldSkills UK national finals are held in the NEC, Birmingham but this year, because of COVID restrictions, the finals will be held at 23 venues throughout the UK.  With all eight Industrial Robotics finalists representing Northern Regional College, WorldSkills UK invited the College to host the final will be hosted at its Ballymena campus.

Julia, who is now studying at Ulster University’s Magee campus, said the Foundation Degree gave her an opportunity to fulfil her hopes to attend university when she didn’t receive the A-level results needed to progress.

“Securing a place at Northern Regional College turned out to be the best option for me. I wanted to study engineering at Ulster University, so the Foundation Degree was an ideal pathway for me,” Julia said.

Now that she is at university, Julia is “reaping the rewards” of the hands-on experience and knowledge gain while studying at the College.

“I learned so much about Industrial Robotics and CAD. This has been a great help, not only now that I’m at university, but it will also help on work placement and later when I get a job in industry.

“The Foundation Degree has helped me immensely and, thanks to the encouragement and support of my lecturers, I am well prepared for going into the second year of my degree at Ulster University.”

Reflecting on making it to the WorldSkills UK national finals, Julia said it has been a great opportunity for her to develop new skills and knowledge.

“We are using new software to compete in the competition. As Thomas and I have progressed through the qualifying stages, I can see how our hard work is paying off. We have grown in confidence, as well as in our determination to succeed,” she said.

Julie’s ‘Cyborg’ teammate, Thomas Simpson, also enjoyed a positive experience at Northern Regional College. He said the skills he developed have helped him continue with his studies on part-time basis while working.

Describing the Foundation Degree as “a brilliant foundation” for progressing to university part-time.

“Getting to the national finals of WorldSkills UK has been a great confidence boost and something I can add to my CV. The competition has been a brilliant opportunity to meet new friends and learn industry specific skills.”

Northern Regional College Engineering lecturer, Karla Kosch explained that, in order to qualify for the UK national finals, competitors had to demonstrate excellent communication skills to work together effectively.

“As they progressed through the competition, they had to tackle CAD modelling and programming and they were tested on their virtual and real-world programming skills using the FANUC Educational robot cell,” continued Karla.

The other Industrial Robotics teams in the WorldSkills UK final are ‘Hammer Basher and Sparky’ (Cameron Middleton and Adam Kirkpatrick), ‘The Athletes’ (Jude Moore and Aaron Stevenson) and ‘2 Dudes and 1 Robot’ (Louie Heath and Brennan Wilson).

As well as the eight Industrial Robotics finalists, the College has representatives in three other categories: Lydia Fletcher, second year Computing student at Coleraine, is in the IT Software Solutions for Business final; Savannah Hodgins and Jonathon Wilsdon have made it through to the 3D Digital Games Art and Web Design finals respectively.

Gordan Kane, the College’s Skills Champion, has congratulated all the finalists representing the College and said it is a wonderful achievement for them and the College.

“We are justifiably proud for them for what they have achieved so far. It is wonderful to get through to this stage of a national competition and is a great boost for them to be able to have this on their CVs. They are shining examples of the skills and talent inherent in our young people. Their achievement also reflects their commitment and dedication to their respective career paths, and I wish them every success.”

The winners of all the WorldSkills UK finals will be announced during a virtual ceremony hosted by TV presenter Steph McGovern and streamed live from ‘Steph’s Packed Lunch’ studio on Friday 26th November.