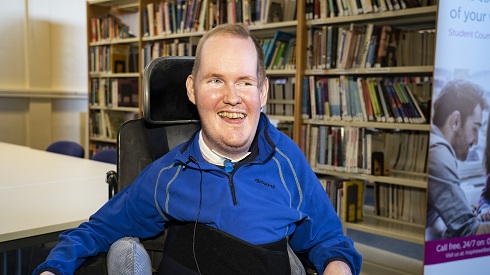 Congratulations to Farm Lodge student Conór O’Kane on his new role as Northern Ireland Champion for AccessAble, an online resource which gives detailed access guides to sites in the UK, to help those with disabilities to plan ahead. Conór, who has spinal muscular atrophy (SMA), is doing Computerised Bookkeeping at the College, is already a bit of a legend in and around his native Portglenone. He’s set to become even better known now that he’s started a weekly blog to highlight some of the issues facing people with disabilities.

Although he only started his blog towards the end of last year, he already has over one thousand followers. The weekly blog posts, which incorporate his #7smiles or seven things that made him smile during the week, are humorous, humbling and inspirational, making the reader realise just how much they take for granted. Recent smiles include having someone scratch his head and a waiter actually putting a menu into his hand instead of leaving it on the table: simple but thoughtful things that help make his life easier.

Conór has a proven track record as a campaigner to raise both disability awareness and accessibility. As a teenager, he was among a group of young activists with disabilities who went undercover to investigate the state of public transport throughout the UK. Their personal experiences, findings and recommendations on how accessibility could be improved were subsequently published in the ‘End of the Line’ report.

He is passionate about promoting accessibility and is using his blog and social media to help break down barriers by sharing his experiences, whilst tackling attitudes and perceptions.

He hopes his new role as Northern Ireland Champion for AccessAble will help him reach a wider audience and make more people aware of the challenges facing people with disabilities and the need to improve accessibility.

Conór says: “Most people find it easy to get around and be independent but when you have a disability, even simple tasks like using public transport can be a challenge and take a lot more advance planning.”

For one of his first blog posts as NI Champion, Conór documented how he used the AccessAble website and app to plan a trip to the SSE Arena in Belfast with his girlfriend Joanne:

“It’s a really handy app. Having all the important information at your fingertips takes away a lot of the stress and anxiety of planning a trip. Hopefully others will find it as useful as I did.”

Conor is also on the board of the Mae Murray Foundation, a local charity which promotes inclusion. He is a big supporter of its ‘Hands up for the Beach’ initiative which gives families access to equipment like buggies and accessibility mats to use at the beach.

Conór is currently doing a Computerised Bookkeeping course at Northern Regional College’s Trostan Avenue campus and says he enjoys the course and his time at the College and might even come back to do another course next year. “I can see how the Bookkeeping course could have business potential for me as it’s something I enjoy and could work at from home.”

Bookkeeping lecturer Jacqueline Wilson says Conór has had a very positive influence on others in the class:

“Conór is very logical, methodical and capable and while he doesn’t want to be treat differently because of his disability, he wants to raise awareness about living with a disability.

“He uses his blog and social media to share his experiences and break down barriers, whilst tackling attitudes and perceptions. He is very supportive of others in the class and if he ever comes across an article or video that he thinks others in the class will find useful, he’ll send it on to them. He’s a great student to have in the class. “

Living with SMA hasn’t stopped Conór from living a full, healthy and active life. He enjoys both watching and participating in sport. He trains regularly with the Trailblazers Powerchair football team in Belfast and two years ago was captain of the Northern Ireland team when they played against England in the European Powerchair Football Association (EPFA) Home Nations tournament.

He also enjoys spending time with his girlfriend Joanne, family, friends and his dog Mitzy; nights out, nights in, good food, going to concerts and a bit of shopping.

He continues: “I’m a huge Snow Patrol fan and an avid Manchester United supporter. As I get older, I’m discovering a love for travelling. My most recent adventures include trips to Las Vegas and Alicante. I also enjoy the odd game of poker and enjoy audiobooks, particularly autobiographies.”