Home / News / Portrush Teenager On Track For Career In Music

Portrush Teenager On Track For Career In Music 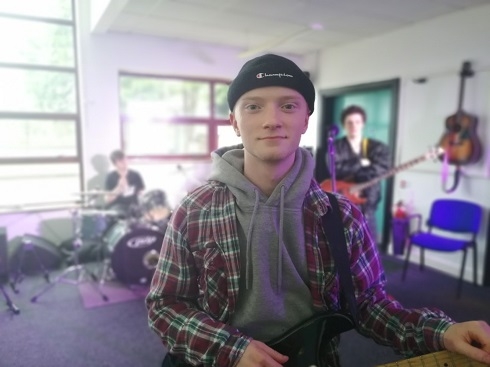 The practical ‘hands on’ aspect of the Performing Arts course at Northern Regional College appealed to an aspiring songwriter from Portrush who is now on track to study music at university and pursue a career in music. After completing his GCSEs at Coleraine Grammar School, Joel Fleming (18) enrolled on the Level 3 Extended Diploma in Performing Arts (Music) at the College’s Coleraine campus.

Now in the final stage of the two-year course, he has accepted a place at Ulster University to study Music, which he says will further develop his understanding of every aspect of music and bring him one step closer to achieving his dream career of working as professional musician.

The BTEC Level 3 Extended Diploma is the equivalent of three A levels. Joel explained why he opted to do this course at the College instead going back to school to do A levels.

“This is a very practical course in terms of developing skills in performance, song writing, production and recording but we also get a thorough understanding of the underpinning theory.

“I started off with just a basic knowledge of music theory, but I now have a good understanding of all aspects of the theory of music like chord composition, timing, signatures and so on. This has really benefitted my song writing and, also helped me to understand the music I listen to every day.”

Work experience is an important element of the Performing Arts course and Joel had an opportunity to work with broadcasting and production company, LSFX as they were setting up for a performance in Belfast. This allowed him to experience at first-hand how sound engineers work behind the scenes to prepare venues for professional performances.

Joel said his music knowledge had greatly improved since he enrolled on the Level 3 course and he had also progressed as a performer during his time at the College. While he enjoyed all aspects of the course, his favourite unit was Performance Workshop.

“We played a variety of genres and different instruments in band settings which taught us how to interact with other musicians in a professional way. We only had a short time to learn new pieces, and this helped my versality as a musician which in turn helped my confidence.”

Joel added that he would have no hesitation recommending the course to anyone with aspirations to work in the music industry.

“If you love music and would enjoy the challenge of developing new skills in composition and performance, you should definitely consider doing the Level 3 Diploma in Performing Arts,” he said.